As external member of the international editorial board for the magazine Topscape – Paysage Editor Milan – I photograph and write about landscape architecture and urban design projects. Other indipendent articles include strategies and spatial policies and projects related to cultural identity, heritage and rural landscapes. Any article implies interviews, site visit and research.    *** projects with my participation Water Plan Antwerp (Belgium) – The origin and historical development of the city of Antwerp, in Belgium, has always been linked to water. In the last decades the city has invested carefully in urban development policies, with spatial quality as the main driving force and goal. The Antwerp Waterplan aims at enhancing the presence of water as an identity carrier of the city, letting Antwerp develop towards a water sensitive city, in order to face the climate change challenges of the future –  Project by City of Antwerp and advising consortium texts by Samuel Van de Vijver, Lien Engels and  Gianluca Tramutola, Topscape 44 –  May 2021 – Paysage Editore, Milan  – pag. 128-133 Depot  Museum Boijmans van Beuningen – Rotterdam (NL) –   Rotterdam is a city that never ceases to amaze! The Depot of the Museum Boijmans van Beuningen, a surprising and iconic new building designed by the architect Winy Maas (MVRDV), is the latest daring addition to the various museums and cultural institutions within the Museumpark. The landscape project around and on the roof of the Depot, designed by Frank Meijer of the MTD landscape architects studio, brings us back to one of our most recurring desires, that of living in contact with the nature of an “urban forest” –  Project by Frank Meijer MTD landscape architects and MVRDV architects – photographs and texts  by Gianluca Tramutola, Topscape 43 –  March 2021 – Paysage Editore, Milan  – pag. 142-147 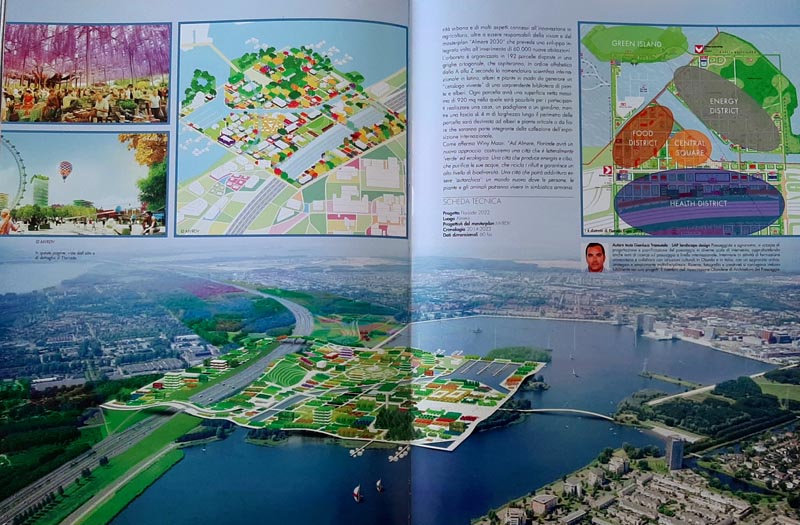 Floriade 2022 – Almere  (NL) –   The seventh edition of Floriade Expo will take place in 2022 in the city of Almere, in the metropolitan area of Amsterdam. An edition with a very actual theme: the development of the green cities of the future. Protagonists of the visionary masterplan of the exhibition’s site are the designers of MVRDV, well known for being among the most creative interpreters of innovative projects, which always link architecture, urban planning and landscape architecture in an original way –  Project by  Winy Maas, MVRDV architects – photographs and texts  by Gianluca Tramutola, Topscape 41 –  September 2020 – Paysage Editore, Milan  – pag. 88-93 Parco delle mura urbiche – Lecce  (Italy) –   The article deals with the careful intervention of ‘landscape mending’ that has recomposed the so far disconnected architectural elements originated in over 2000 years of the strategic area around the northern area of the City Walls. The result is a park charachterized by a multilayerd stone landscape immersed in a fascinating green mosaic – Project by Patrizia Erroi – Comune di Lecce, Gianluca Tramutola (Landscaping), Andrea Ingrosso (lighting design) – photographs and texts  by Gianluca Tramutola and Patrizia Erroi, Topscape 35 – March 2019 – Paysage Editore, Milan  – pag. 92-97  *** Viste nuove sul paesaggio – Zuiderzeezicht  (The Netherlands) –  Over the landscape transformations in the former Zuiderzee and the meaningful landscape identity and landscape perception aspects around the sea dykes. The article deals with the dynamics of land and water in some of the most transformed Dutch man-made polder landscapes – Project by MTD landscape architects – photographs and texts  by Gianluca Tramutola, Topscape 33 – September 2018 – Paysage Editore, Milan  – pag. 122-127 Il Giardino di Ogni Bene – Ex Convento degli Agostiniani Lecce (Italy) –   Over the new garden and open spaces around the 17th Century Augustinian Convent and Church in Lecce. The article deals with the design approach and vision about gardens and public spaces that lost their structure and identity after a long period of improper use and transformations  – project and text  by Gianluca Tramutola, Topscape 28 – July 2017 – Paysage Editore, Milan  – pag. 168-171  *** Roeterseiland Campus – University of Amsterdam –  The new  design of the University Campus’ open space  reveals  a contemporary creative interpretation of a well established  urban space within walking distance from the historic canal ring area of the Dutch capital. A winding  path, just like a ribbon, acts as a real guiding and connective design element and ”lies on” the context as a new layer, generating new and so far unexplored opportunities for the use of the public and private spaces around the university buildings – project by Inside Outside – Petra Blaisse – text  by Gianluca Tramutola, Topscape 26 – January 2017 – Paysage Editore, Milan  -pag. 138-143  *** Hortus botanicus Leiden – Historical garden’s restoration – Founded in 1590, the Hortus botanicus of Leiden is the oldest botanical garden in the Netherlands. A precious secluded green area within the old city centre, it is a site of historical relevance in which scientific research, conservation and study of botanical collections have always had a special meaning. With a new strategic intervention, on initiative of Prefect Paul Kessler, the oldest part of the Hortus, known as Clusius Garden, has recently been reconstructed according to the originary plan in its first location. The transformations in the garden style and use, that occurred in the last centuries, had made the garden disappear. The academic, local and international public can benefit once again of a site of considerable importance for the development of science and garden history  – texts  and photographs Gianluca Tramutola, Topscape 21 – October 2015 – Paysage Editore, Milan ‘Abitare il paesaggio’ – Living in the landscape –  Over the cultural landscapes in the Province Drenthe (NL) and new ways to build new houses in the transition interface between town and countryside and in rural contexts; project by LA 4 SALE landscape architects – texts  Marieke Timmermans and Gianluca Tramutola, Topscape 18 – January 2015 – Paysage Editore, Milan – pag. 114-119 Milan: La Biblioteca degli alberi Park (The library of trees) –  A new multifunctional urban park acts as a real contemporary form of botanical garden in a public space open to the city in the urban transformation scenario of Milano Porta Nuova. The article reveals the design tools of the park within the complexity of the site –  project by Inside Outside – Petra Blaisse – text  Gianluca Tramutola, Topscape 16, June 2014 – Paysage Editore, Milan  – pag. 108-115   ***

Purmerend (NL): Koemarkt square (The cattle market) – The article is about the redevelopment of an urban space of historical relevance due to the change of destination use from cattle market to urban square for leisure and cultural activities. The square is once more a bustling public space, where the historical traces still play a major role for the charachter and  the identity of the city. Project by MTD landscape architects – text  Gianluca Tramutola, Topscape 12 – may 2013 – Paysage Editore, Milan – pag. 86-89  *** Rotterdam (NL): new green textures along the river Maas –   A new ambitious plan for a green  waterfront in Rotterdam next to the iconic Erasmus bridge and the spectacular skyline of Kop van Zuid. The article deals with the use of perennial herbaceous plants and ornamental grasses in public spaces by the famous landscape designer Piet Oudolf; project by dS+V Rotterdam Municipality – text and photos Gianluca Tramutola, Topscape 10 – november 2012 – Paysage Editore, Milan –  pag. 126-131 Polder and water defensive system: Geniepark of Amsterdam – Old a new values merge in a new park around a dike of the Unesco Heritage ‘Stelling van Amsterdam’ (Defence line of Amsterdam), an ingenious 135 km ring system of dikes, canals and forts integrated in the polder landscapes around the Dutch capital. The design of the park deals with the tensions between the historical values, the landscape fragmentation in the urban-rural fringe of Amsterdam and the economical preassures around booming Schiphol airport. Project by MTD landscape architects  – texts G.Tramutola, J.Tummers, F.Meijer, Architettura del Paesaggio 17 – december 2007 – Paysage Editore, Milan – pag. 58-63